Last weekend, on the 19th 20th and 21st of September, I had the amazing opportunity to be part of the first Portuguese Maker Faire. It took place in "Pavilhão do Conhecimento" or in english, the Pavilion of Knowledge, in Lisbon and it was visited by over 9000 people, making it mini only in name. 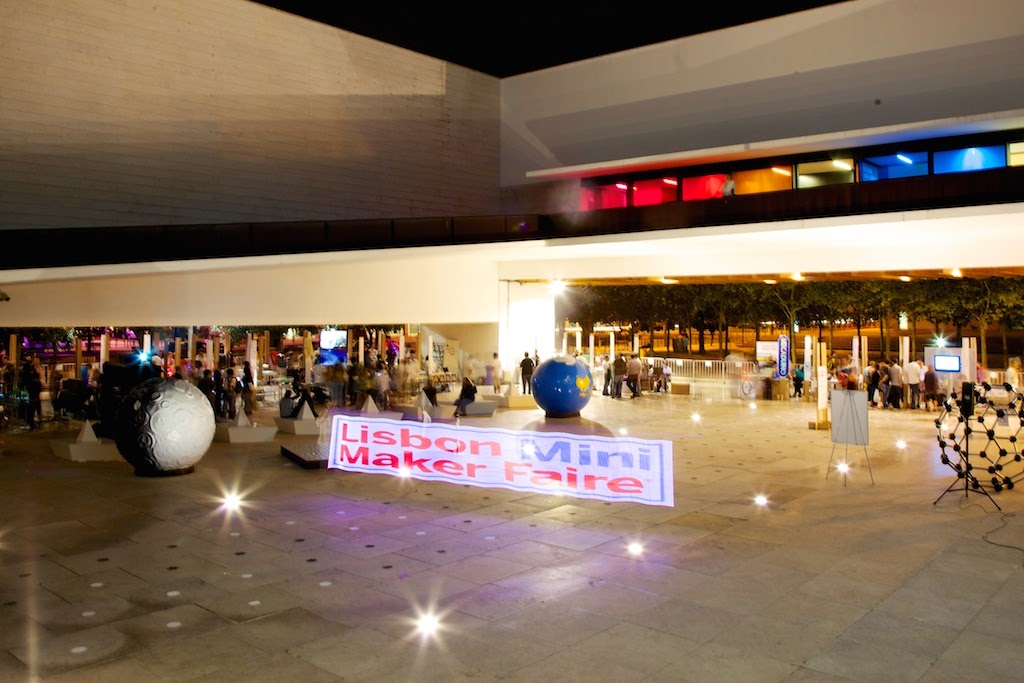 Maker Faire is the greatest show and tell in the world! Originally created by Make magazine, is an event to celebrate arts, crafts, engineering and science projects associated with the Do It Yourself (DIY) movement where the main focus is the sharing of knowledge, experiences and ideas.

I first heard the Maker faire announcement at another event, Codebits 2014, a huge hackathon that takes place in Portugal every year, lasting 3 days, running 24 hours a day. As soon as I heard about it, I knew I would be participating in Maker Faire. As a member of eLab Hackerspace, I knew that as a group we had lots of project to present. So we got working together and started preparing everything for this great event! Here are some of our projects:

From my friend Mário Saleiro you could see 3 of his amazing projects: TheMaker3 - a CNC machine built from reused materials from old photocopiers and computers; The Hackeyboard - a mechanic computer keyboard with innovative functionalities; and MiRo - a 10kg mobile robot: 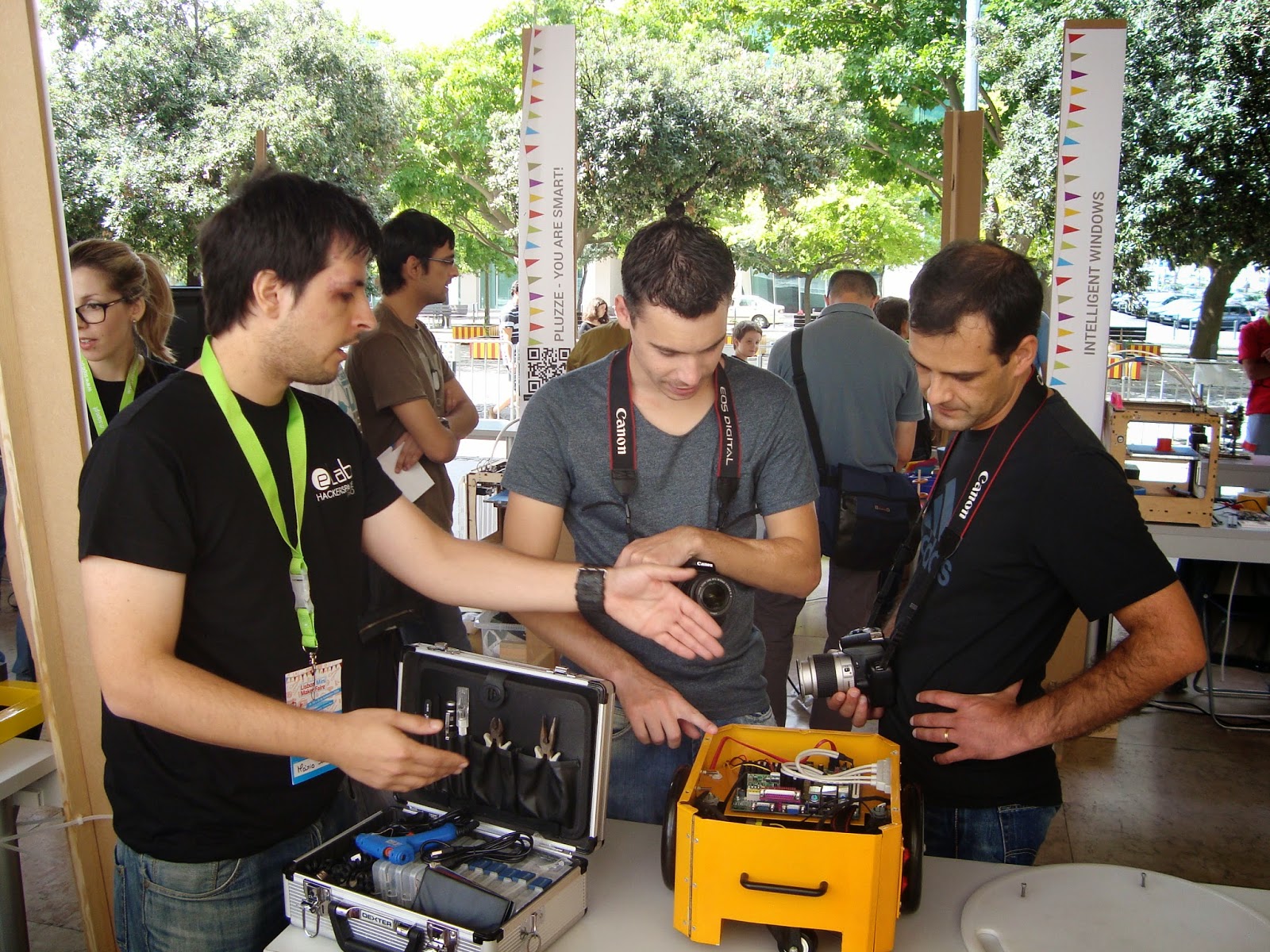 Still from Mário together with Bruna Carmo we had the adorable Infante Robots, an educational robotics system which was a huge success among the younger visitors: 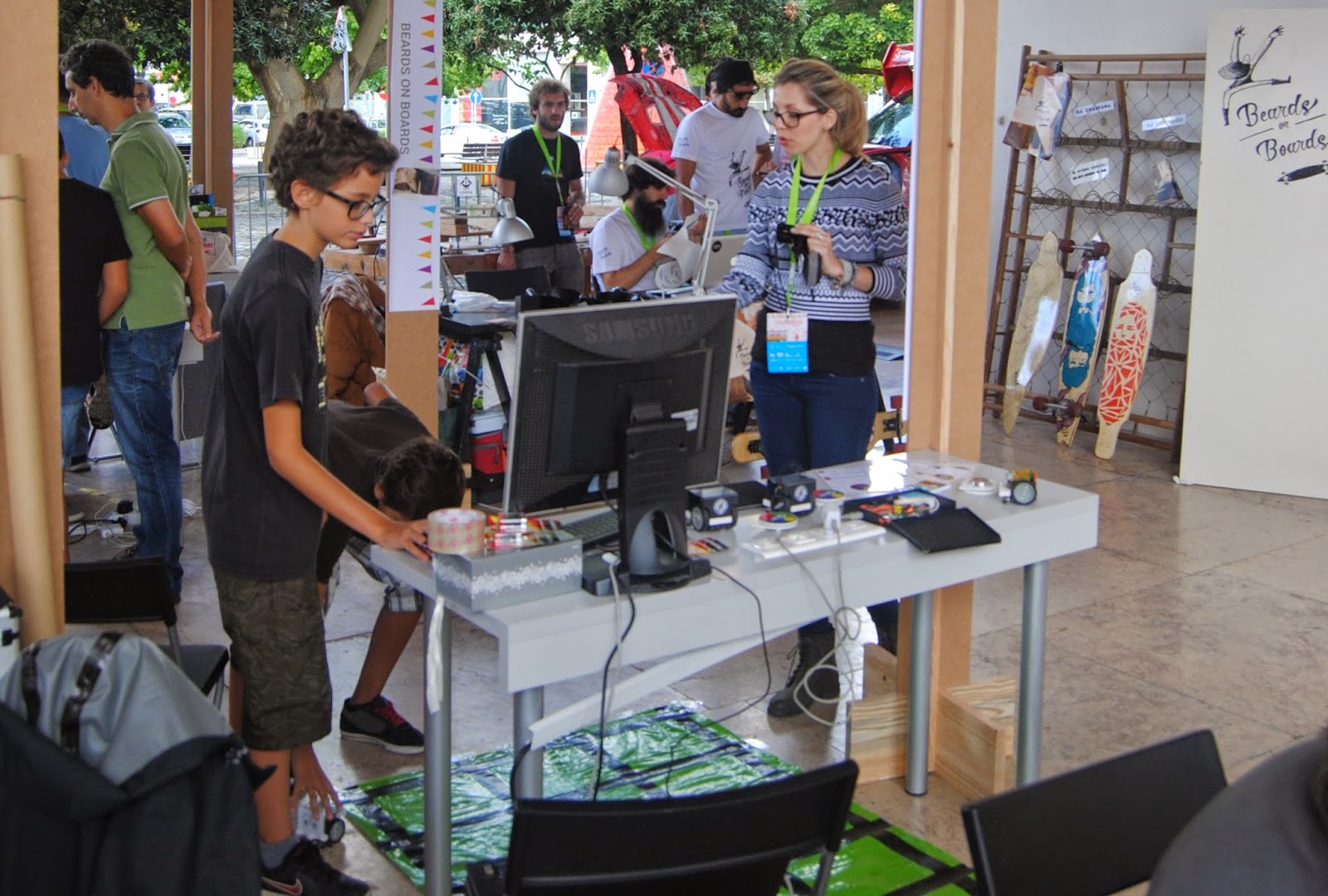 From another great friend of mine, Hugo Santos, we had his Self Balancing Robot, a 2 wheeled robot demonstrating the working principles of Segways: 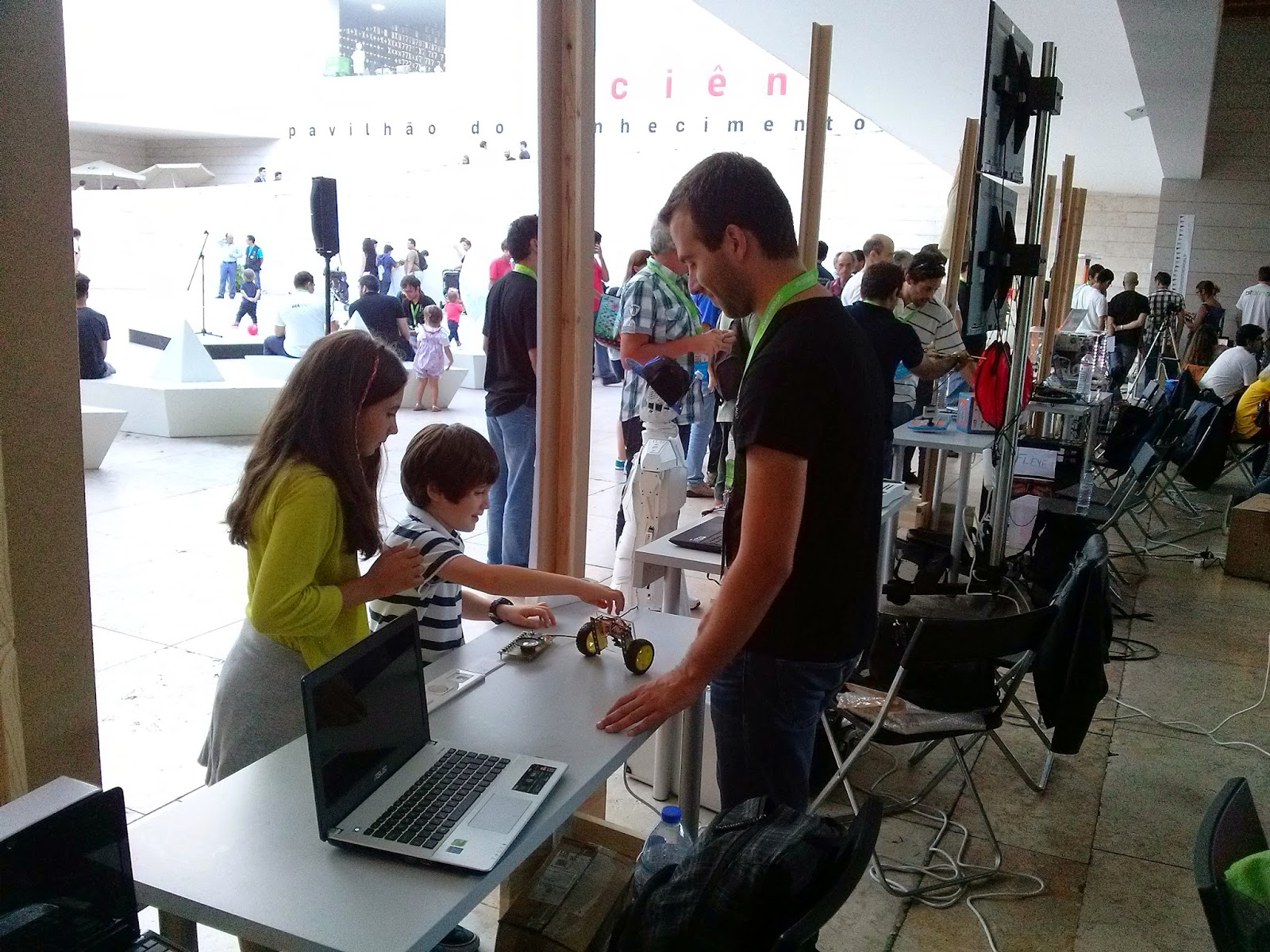 Emidio Martins presented his LED optical transmission system, which converted audio into light and then back into audio again: 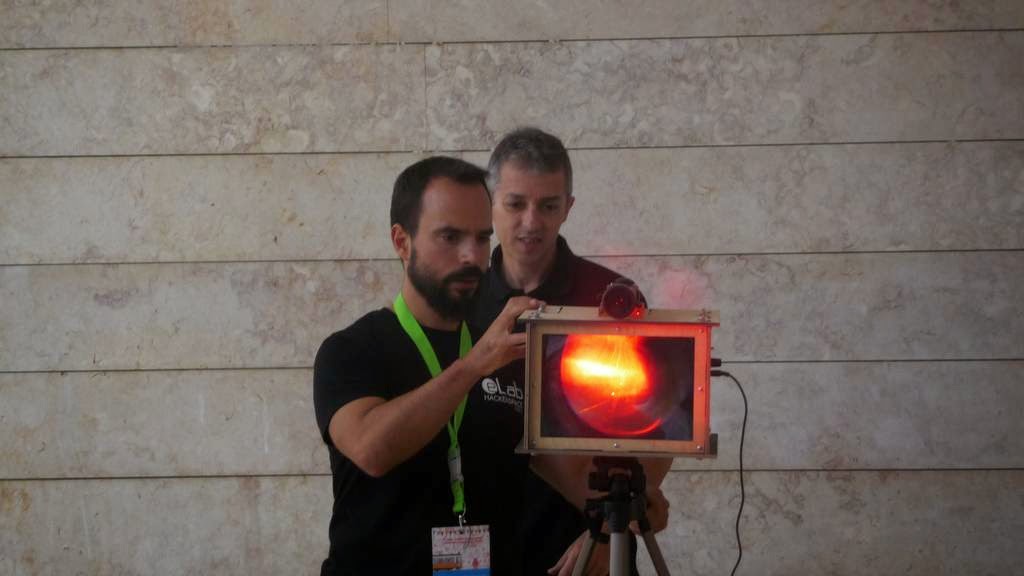 Nelson Neves showed us his intelligent windows project, a 3D printed mechanism system to open and close windows through a web interface: 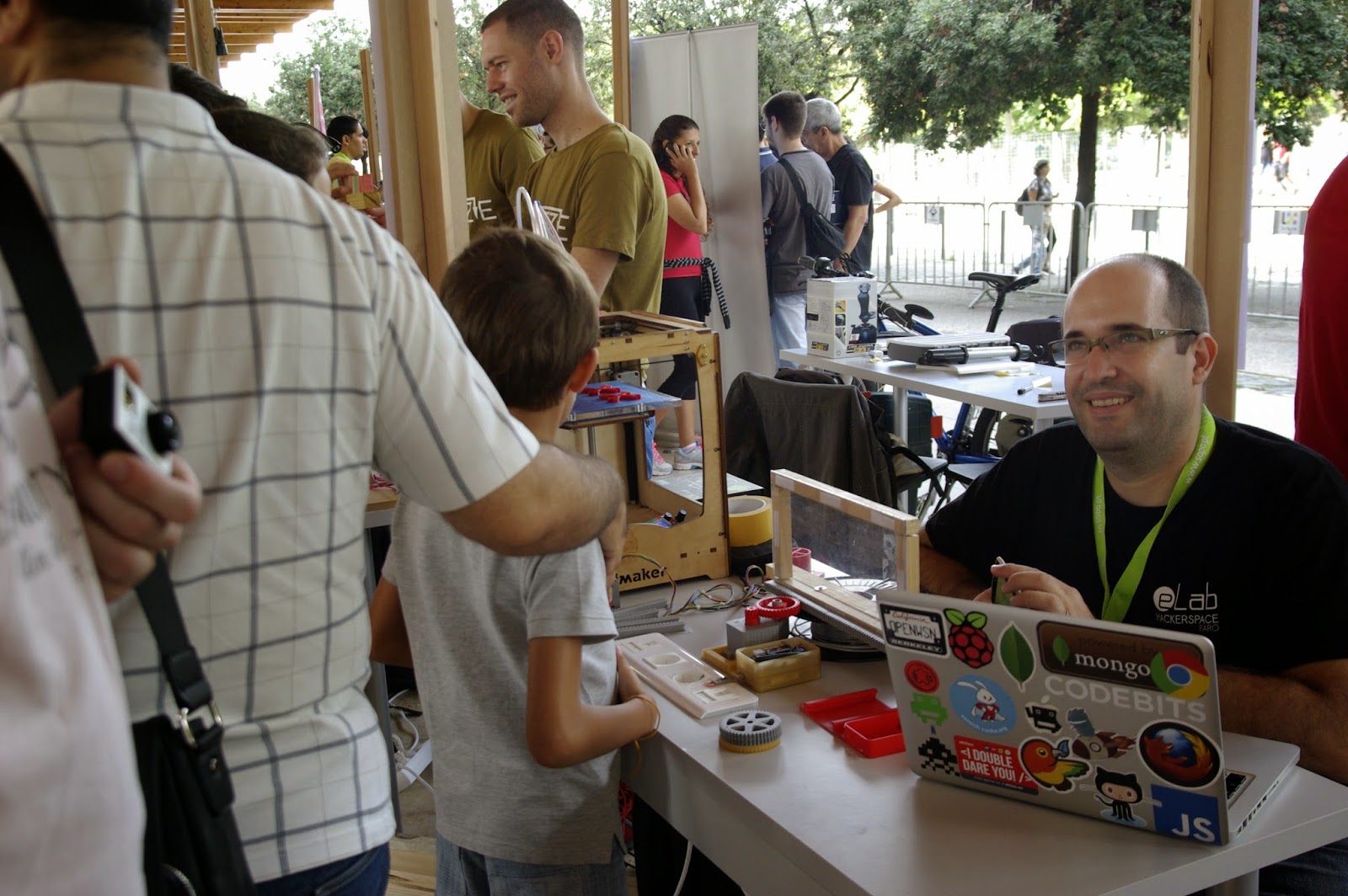 Then we had the low cost spot welder, initially built by Gonçalo Pereira and later upgraded as a group project, presented by Álvaro Valente: 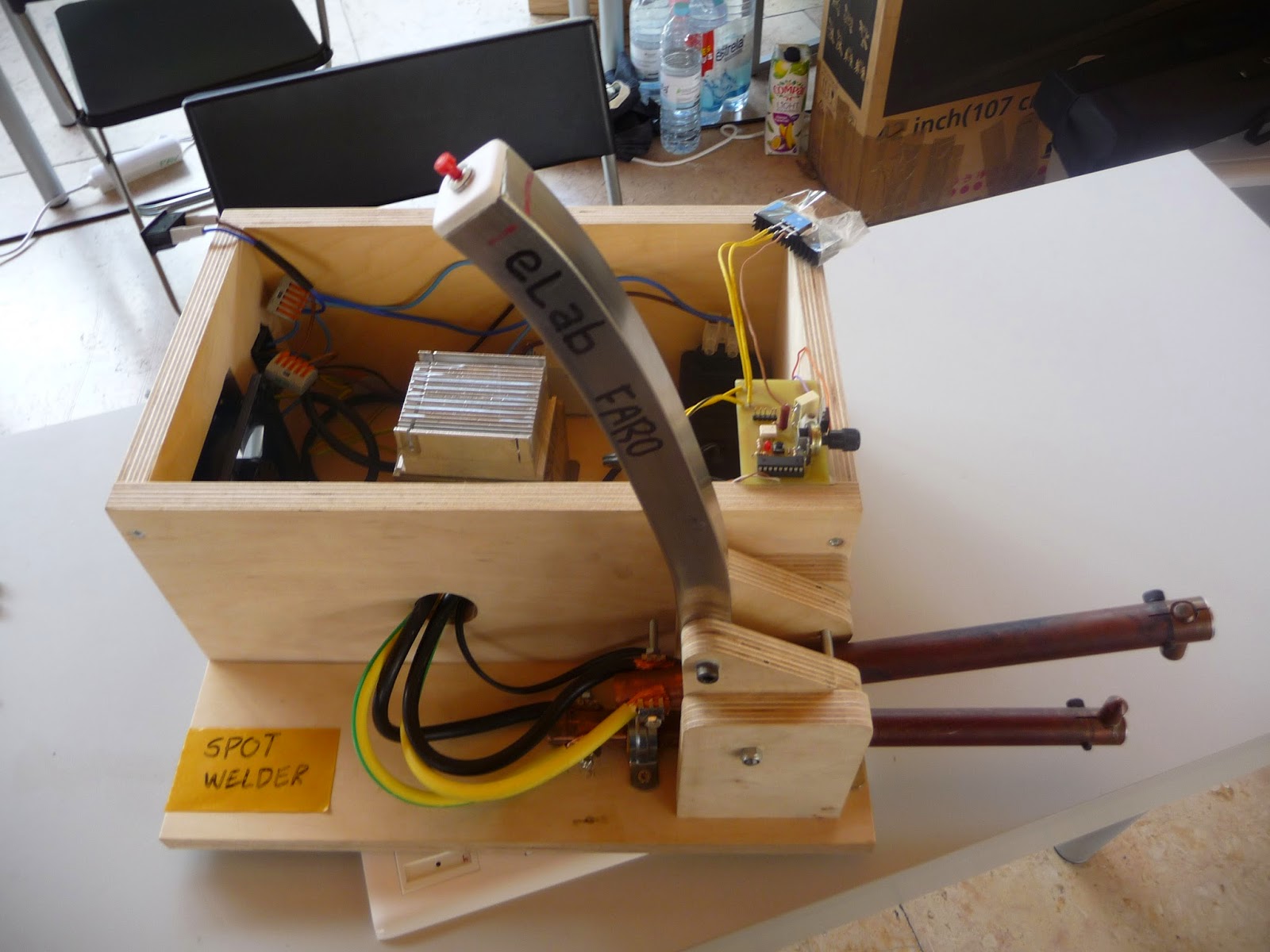 And I took my Tesla Coil, which I'll be presenting in detail in a future post: 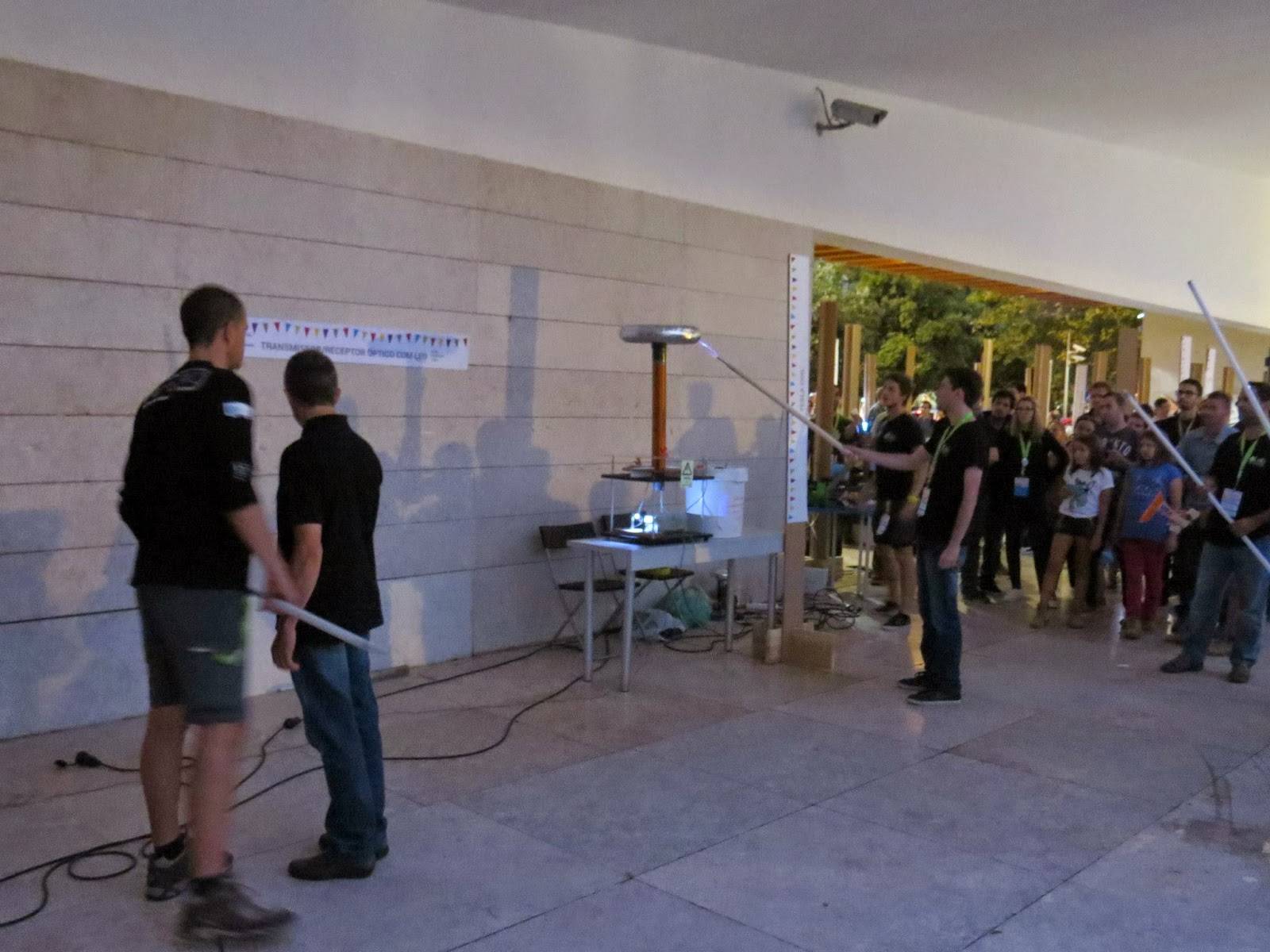 But these are just a few among all the 16 projects presented by eLab Hackerspace members.

Besides the projects, me and Hugo also presented a workshop at the Faire, about KiCad - an open source, multi-platform and higly customizable PCB design software: 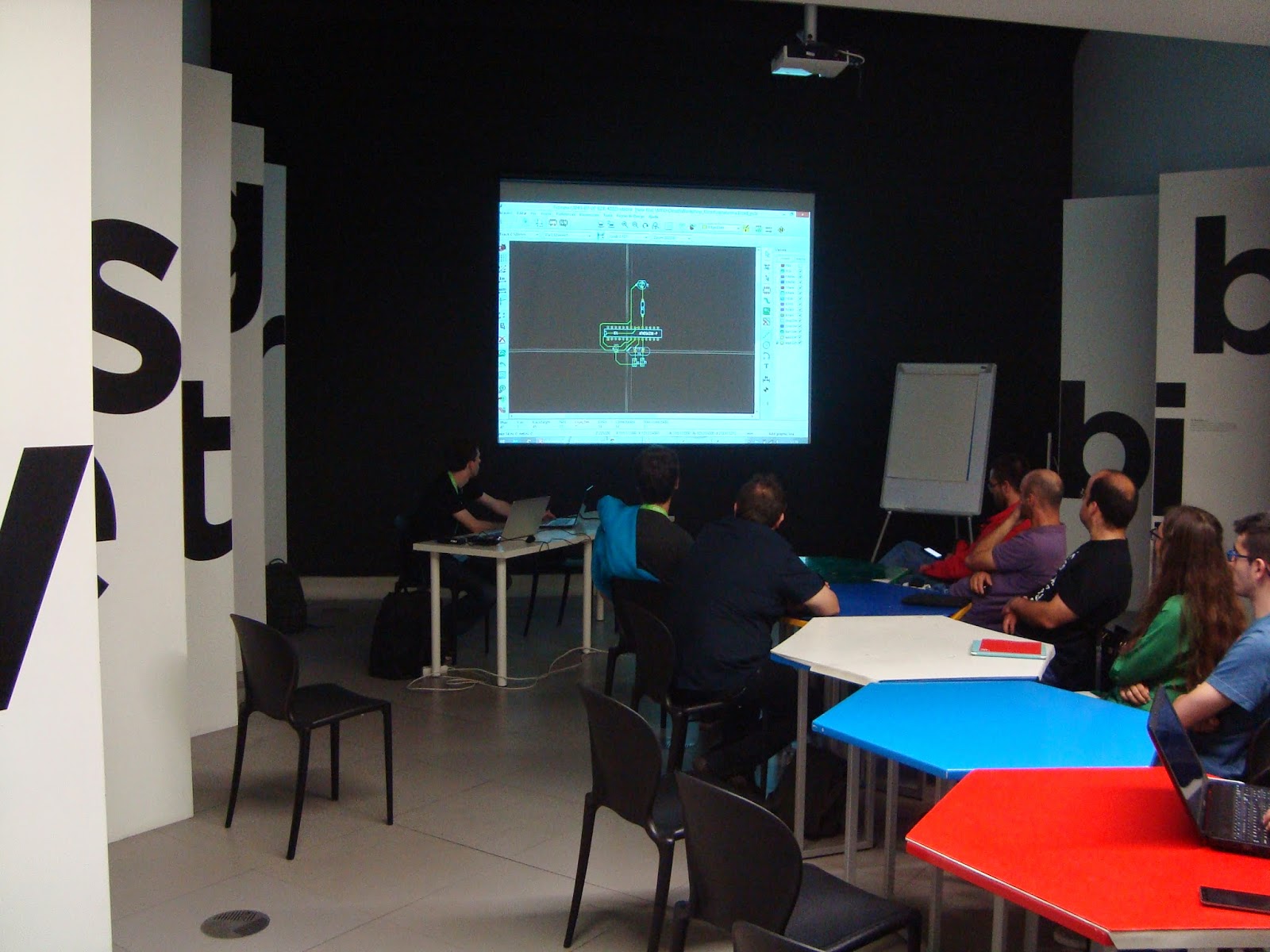 And of course, we received goodies! Each project received 2 special edition Lisbon Mini Maker Faire Arduinos, and I additionally received 3 Arduinos (a Uno, a Due and a Yún) as a reward for the Tesla Coil, as one of the main attractions of the event: 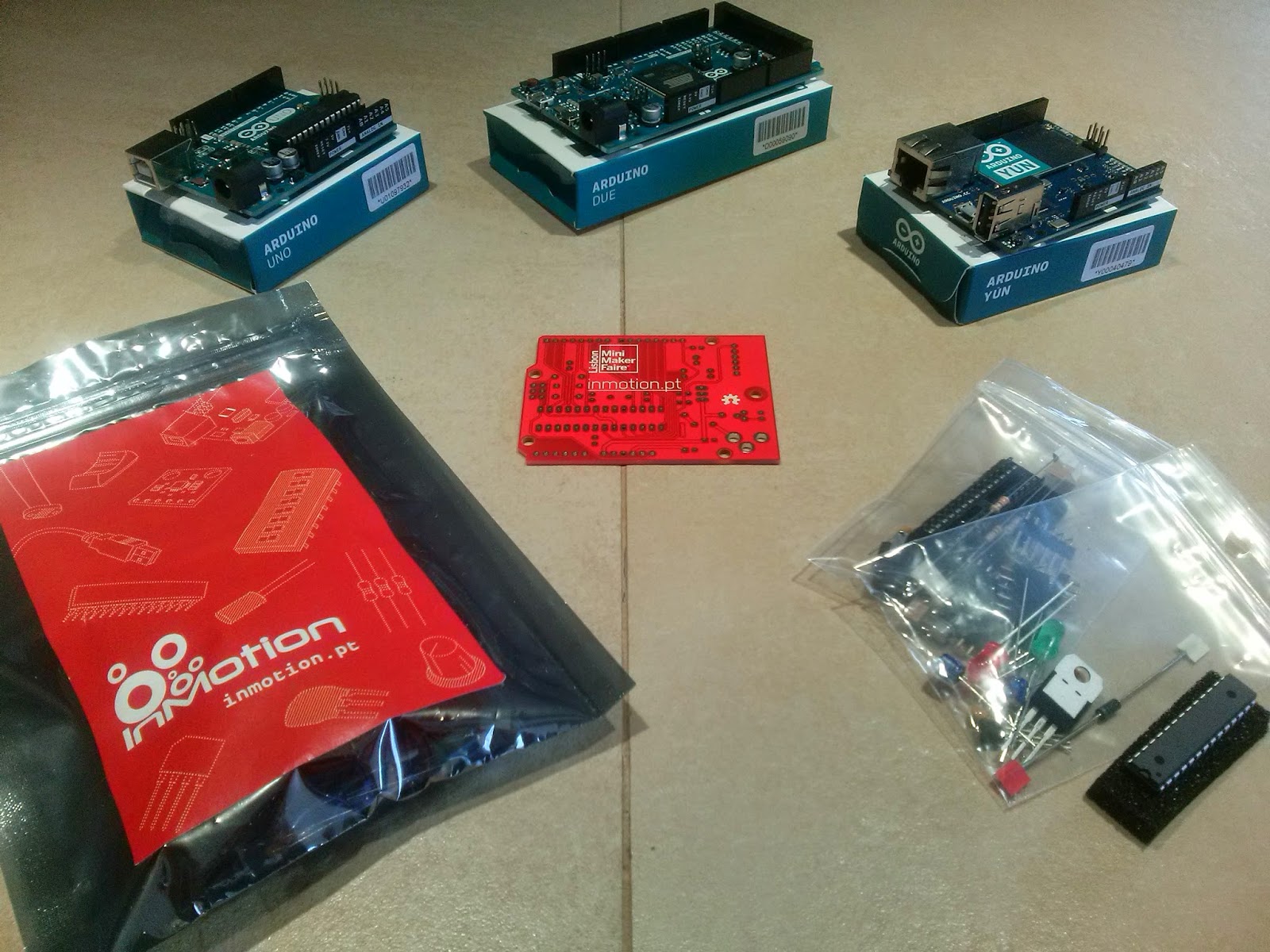 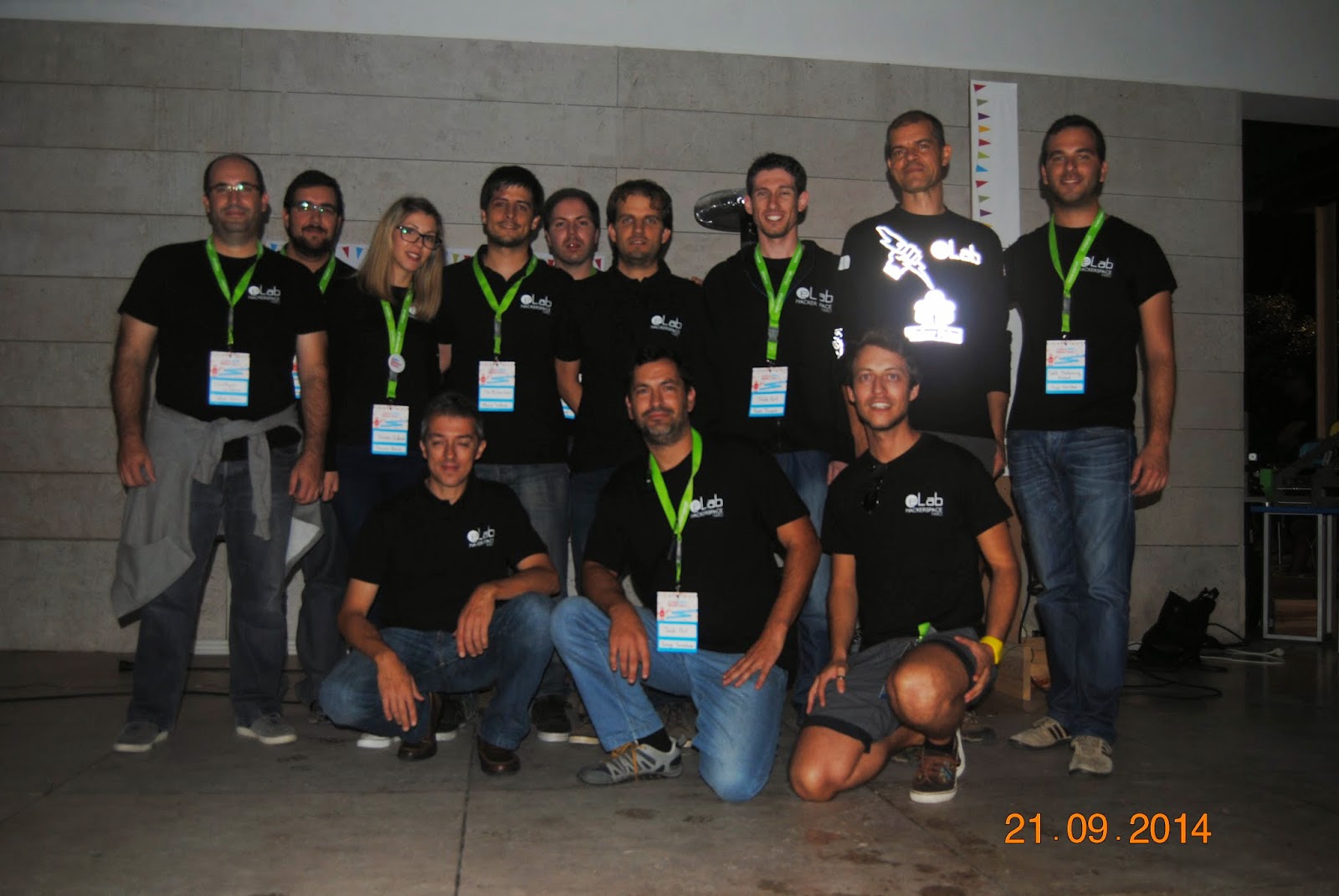 Together we were able to show what we do best: to build, to create, to learn and to share, the essence of the maker movement! 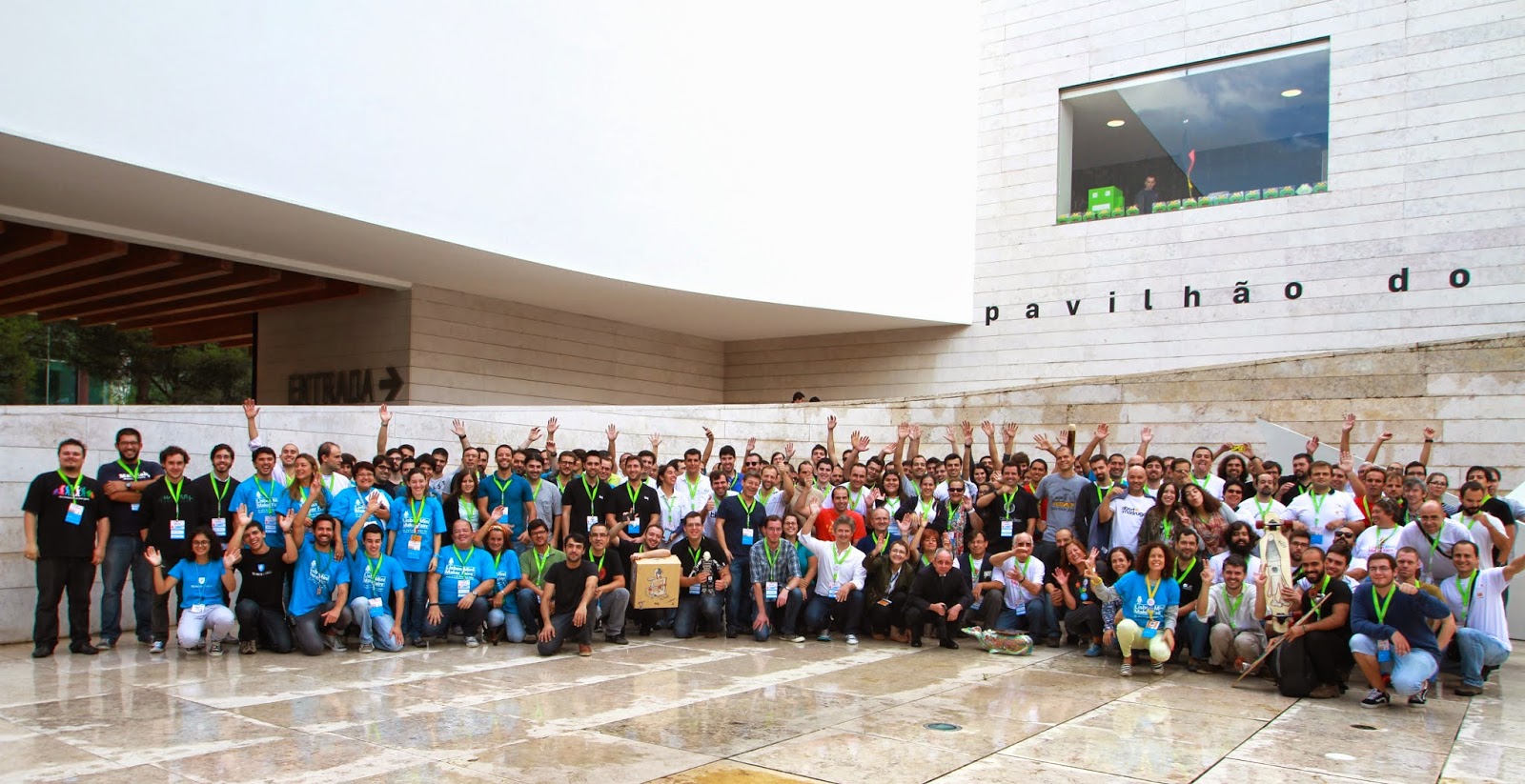 As this was the first one in Portugal, the best estimations pointed only for about 3000 visitors but it proved out to be a huge success, highly surpassing that number and reuniting 70 makers with over 100 projects.

Now it's time to start preparing for Maker Faire 2015!